So as I was emerging from my reading slump, I discovered reading challenges and readathons. As I discovered by following book bloggers and bookworms on twitter, there’s quite a few of these floating around. I participated in my first one January which was the 24in48 Readathon hosted by Rachel Manwill (incidentally, she’s also the curator of the 2016 Book Riot Read Harder Challenge and the 2016 Panels Read Harder Challenge). It was a beautiful weekend filled with books, reading, interacting with other participants, and a general sense of belonging with the bookish community which was a potent reinforcer of my reading behavior. I also attended my first Read Harder Book Group in Chicago (Yes, I was pleasantly surprised to have been ‘featured’ in their recap). Clearly, interacting with the bookish community in person or online is functional in maintaining high rates of reading.

Then in February, Lotte hosted the #5books7days readathon, which unsurprisingly was a lot of fun. I did attempt to curate a stack, but obviously didn’t stick with it. It was the challenge that lead me to reading my first Daniel José Older book, for which I’m grateful.

Along came March, and the wonderful Julianne (Outlandish Lit) hosted a month-long Weirdathon. 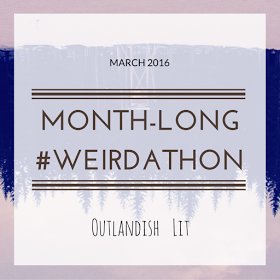 The challenge was pretty straightforward: “Read as many weird books as you can during March.” It has been real fancy- with tasks, giveaways, weekly weird-offs between book bloggers, and tons of awesome recommendations. I participated, and although I didn’t cross of all the tasks, I thought I’d do a short *snort* recap of the weird books I did read:

First of all, Daniel José Older is amazing at writing POC characters. Second, I wish this book had existed for me to read back in high school or even college, because I would’ve eaten it right up back then as I did now. The main character Sierra is such a kickass protagonist. Weeping murals, supernatural order that connects with spirits via music, paintings, and stories, once-friendly-now-turned-evil-and-greedy-Shadowshaper, it’s everything I wanted to kick-off this ‘thon. I listened to the audiobook, narrated by Anika Noni Rose, who did a brilliant job with the narration and gave life to the characters. I definitely recommend you get your hands on this book.

2. The Girl Who Circumnavigated Fairyland in a Ship of Her Own Making (Fairyland #1) by Catherynne M. Valente

Twelve-year old September’s ordinary life in Omaha takes a turn when she is invited on an adventure one day by the Green Wind, who alludes to her services being required in Fairyland. Once there, she meets a very fickle Marquess who requires her to retrieve a talisman from the enchanted woods…or else. Through her journey, she meets and befriends several creatures, including a book-loving Wyvern (my personal fave).

Looking for an Alice In Wonderland sort of reading experience? Look no further.

3. The Night Circus by Erin Morgenstern

“The circus arrives without warning. No announcements precede it, no paper notices plastered on lampposts and billboards. It is simply there, when yesterday it was not.”

(Hmm, I sort of don’t want to summarize this one.)

Basic plot: Two young illusionists are in competition with each other, and the circus is their playing field. They’ve been trained all their lives for this by their respective masters. The “game” can only end with the last man standing.

I refuse to say anything more. Just go to your nearest book source and read this ASAP if you haven’t already. SO GOOD. This made my all-time favorites list.

Once again, I am reluctant to give too much away. So here’s the premise: Every ninety years, twelve gods incarnate as humans. They are loved. They are hated. In two years, they are dead. A friend had lent me their copy and it had been sitting on my shelf for months, so I decided that weirdathon was as good a time as any. Boy, this absolutely fits the bill. Gorgeous illustrations. Needless to say, I’ve got the rest of them waiting to be read. Kieron Gillen is a fucking genius.

5. All The Birds In The Sky by Charlie Jane Anders 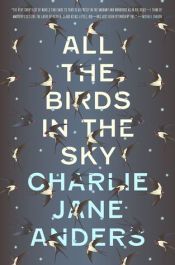 The shelf-talker at the bookstore said that this book brought Hermione Granger, Artemis Fowl, and Marvin (from Hitchhiker’s) into the same universe. That’s pretty much the best description I could offer to you.

Go read it, sci-fi nerds. You’ll love it. If you’re not a sci-fi nerd, I recommend you take a peek.

I don’t know if it’s just me, but it seems like retellings have been in-style recently. There’s several reasons why I was looking forward to this book. Feminist protagonist? Check. Brontë sister? Check. Reimagining Jane Eyre? DOUBLE check.

“Reader, I murdered him.”

Jane Steele, our protagonist, is a Jane Eyre fangirl, and her life eerily mirrors our Brontë heroine. Dark humor, gothic fiction, pertinent POC characters, a murdering  protagonist, and a dash of romance- this book had me at the edge of my seat and gasping audibly, especially those last 100 pages. Plot lines, character development, structure, and writing were A++++. GO READ THE BOOK.*

That’s about it, I think. Thanks to Julianne for hosting such a great readathon! I enjoyed reading ALL of the books, and my favorite part of the whole thing were the weekly weird-offs (good old-fashioned book bloggers duel, what’s not to love?)

*Disclaimer: There will be a lot of times in this space where I shall urge you to GO READ THE BOOK because I absolutely loved it. I make no apologies.

Until next time, folks!

After a lot of hemming and hawing, I’m entering the blogosphere. For anyone who’s known me for a while, feel free to skip this post.

For those of you that are interested, here’s a rough timeline:

I was born in India but spent the first 17 years of my life in Muscat, Oman (don’t stress about having to Google that, I’ve got all the information you need right here). I moved to India to do my undergrad, and then moved to Chicago in 2013 for grad school.

In the process of all of these things, I read a LOT (reading under the duvet using a flashlight past my bedtime was a nighttime ritual that began in middle school). Then grad school happened, and I was swamped with so much academic reading that I barely had the time, or energy to read much else. However, with the people I was fortunate to meet in-person and/or interact with in the twitterverse, I became more cognizant of the social justice movement and engaged in educating myself in causes that I was passionate about (diversity, intersectional feminism, etc).

Since the beginning of this year, I have gained some of my previous reading mojo which has led to several awesome things- creating interventions for my reading behavior, reading mindfully, connecting with members of the bookternet, geeking out about books with fellow booknerds, actively participating in readathons and reading challenges, and in general making my reading more meaningful and fulfilling. For all of this, I have to thank the good folks over at Book Riot, who are doing phenomenal work for the bookish community. They’ve (inadvertently) been pivotal in this whole attempt-to-put-thoughts-about-books-onto-paper thing.

Anyway, I don’t really know how I will be going about this. I mean, talking about books I’m enjoying- it shouldn’t be too hard yeah?

Anyway, if you stumbled on this page on your way to read things written by people who know what they’re talking about, thank you for making it all the way to the end of the post. Feel free to say hi!

This is a running list of the books (prose only, maybe graphic novels) I’ve finished reading in 2016. You can click on the title to be redirected to its Goodreads page:

Yup, that pretty much sums it up. Go read the book y’all!